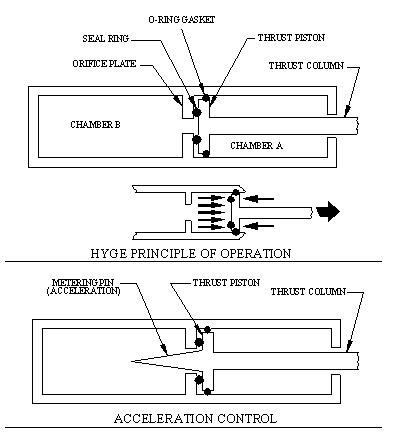 Each of the systems in the HYGETM line of automotive safety test equipment includes a HYGETM actuator. The HYGETM unit develops its powerful, repeatable thrust through differential gas pressure acting on the two faces of a thrust piston in a closed cylinder.

In preparation for firing, compressed gas is introduced into chamber B until the forces on the thrust piston are equalized. Any further increase in the pressure in chamber B upsets this equilibrium, opens the seal at the orifice, moves the piston away from the orifice plate, and instantly exposes the entire piston area to the gas pressure in chamber B. A controlled thrust on the piston results. Transmitted by a thrust column, this limited-duration thrust acts upon a test specimen to produce an accurately predictable acceleration or velocity.

When the unit is used as a velocity generator, the necessary control is obtained by changing the pressure magnitudes.

The HYGETM principle, as applied to safety testing, simulates the longitudinal deceleration conditions of an actual impact, but in reverse. Prior to an actual crash, the test vehicle and manikin each move at constant velocity. At impact they are stopped very rapidly.

With the HYGETM system, the test vehicle assembly and the manikin are initially at zero velocity. This situation simulates the constant velocity conditions prior to an actual crash.

The acceleration control illustrations show the velocity and acceleration relationships between an actual crash impact and a HYGETM simulation.

Some significant advantages of the application of the HYGETM principle to crash simulation testing are: