The 12-Inch HYGETM system is designed to simulate the effects of a collision in acceleration rather than a deceleration mode. The standard 12-inch HYGETM has 225,000 pounds (1 M newton) of thrust. The HYGETM design provides extremely repeatable and reproducible acceleration pulses, enabling accurate simulation and modeling of crash conditions in non-destructive fashion. A given pulse can be accurately produced on any 12-Inch HYGETM system, enabling component suppliers and OEM manufactures to share testing programs and data interchangeably. The HYGETM system has proven its repeatability/reliability over time. Systems over 40 years old routinely demonstrate repeatability of better than +/- 2%.

Over 50 12-inch HYGETM systems are in active use worldwide for a variety of automotive, military, aircraft safety testing applications. Some typical HYGETM applications include:

The 12-inch HYGETM actuator consists of two 12-foot long (3.6m) stainless steel cylinders; each with a 12-inch (30.48 cm) bore. The shock tester is mounted on the face of a reinforced concrete foundation (reaction) block. All HYGETM units use a metering pin is to throttle the amount of energy transferred to the carriage at any given time during firing, thereby determining the shape of the acceleration pulse. A particular component, in a particular crash situation, will have a waveform determined by modeling or by actual crash tests. Each metering pin is machined to produce the desired pulse shape for a given specimen and set of crash conditions. In addition, aspects of the waveform can be varied through changes in the set cylinder volume, load cylinder volume and the gas pressures in each cylinder prior to firing.

HYGETM offers a metering pin design program, which enables the engineer to enter the characteristics of the desired waveform and automatically generate the required metering pin profile.

The rail units are manufactured in 10-foot (3m) sections. A 100-foot (30.4m) rail assembly is supplied with the 12-inch HYGETM system as standard. The rail sections are installed approximately 3-feet (100cm) apart on concrete piers or flush to floor at the users discretion. Extra rails are available in 10-foot increments. The rail sections are precision ground on the top, bottom and inside edge to provide guidance for the carriage. Each rail section includes the necessary anchor bolts, bolt positioning template for locating the bolts in the concrete foundation, and the necessary nuts and washers. The rails may be mounted flush with the floor, or raised. An optional maintenance pit, which is about 15 feet long by 2 feet deep, may be installed as part of the foundation instillation.

The compressed air module consists of two compressors, capable of producing 34 scfm (962 l/min) @ 4500 PSI (310 bar), storage tanks, a dryer, pulsation tank, condensate trap and blow down tank with filter and oil separator are provided, complete with piping and electrical components all mounted on a steel framework, ready for installation.

The hydraulic fluid reservoir and transfer system provides the means of varying the gas volume of the cylinders prior to firing. By adding or removing fluid, the pulse form may be adjusted.

The automated control system provides complete automation of the preparation and firing sequence. A graphical user interface allows the operator to visually determine the status of the system at a glance, and program firing parameters using a menu system. The control center also offers a convenient interface to a variety of supporting equipment. 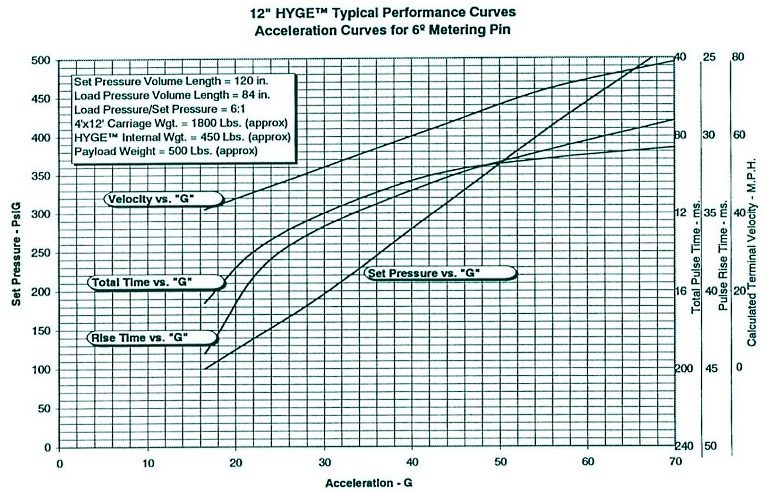 click image below to view larger image in new tab.