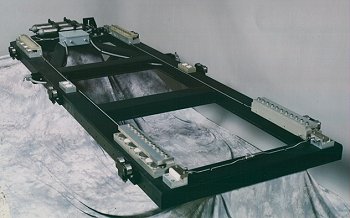 The top of the carriage is flat, and the sides are unobstructed at least 2 inches below the top-mounting plane.

The top plate has a pattern of tapped ½-inch mounting holes located on 3-inch centers. A carriage top plate with metric hole sizing and spacing may be selected, if desired. Additional mounting holes are placed on the sides and rear of the frame.

Two brake systems are included in the standard HYGETM. The first system (Primary) is a brake that is energized prior to firing and remains on during the firing. The second standard system is an emergency brake system mounted on the carriage that is actuated by a cam switch farther down the track. If the first system fails or has not been energized, the second system will trip and stop the sled before the end of the rail system.

The carriage pneumatic brakes operate on the rails through brake shoes. The maximum drag force from the carriage is at least 12,000 pounds (5,450 kg).