Dynatest 500 Component Crash Simulation system is designed to simulate the effects of a collision in either acceleration or a deceleration mode. In the acceleration mode, the component is sitting at rest and is then accelerated at the same rate that the component was decelerated in an impact. The Dynatest 500’s design provides extremely repeatable and reproducible acceleration pulses, enabling accurate simulation and modeling of crash conditions in non-destructive fashion. The system has proven its repeatability over time. Systems over 40 years old routinely demonstrate repeatability of better than +/- 2%.

1. The inclined plane does not offer sufficient testing flexibility so that speeds can be increased readily.

2. The inclined plane impactor requires a test area with a high ceiling clearance so that the height of the impactor can be adequate to produce the desired speed.

3. The Dynatest system can be mounted in any direction, not just horizontal.

The advantages of the Dynatest 500 are that it is highly flexible and compact. The system is based on the HYGETM crash simulator which is a proven system in place at virtually all of the worlds automobile manufacturers. The Dynatest 500 can be used to test components such as door latches, windshield, transmission, engine, fuel tank mounts, body parts, etc.

Briefly, the system is composed of a six-inch horizontal HYGETM, and an optional small sled that may be equipped with a dummy. In operation, the sled will be energized by the HYGETM accelerator, move about 12 inches horizontally to attain the proper velocity, coast for another 12 inches, and then be abruptly stopped by a special shock absorber to simulate a crash.

Systems are in use worldwide for a variety of automotive and aircraft safety testing applications. Some typical applications include:

The Dynatest 500 is designed to accelerate a maximum seat rated payload of 210 pounds (95 kg). The system can attain 50 G’s, and up to 45 miles per hour on a 75 pound seated payload. By changing to a different metering pin design, various pulse shapes can be produced. Low speeds and accelerations can be achieved without chatter.

The Dynatest actuator consists of stainless steel cylinders each with a 6-inch bore. The actuator and brake are mounted on two frames that are attached to a common foundation that is flush to the floor. The centerline of the accelerator is horizontal and about 3 feet above floor level. Adding or removing fluid will vary the volume of the Set Cylinder.

The purpose of the metering pin is to throttle the amount of energy transferred to the carriage at any given time during firing, thereby determining the shape of the acceleration pulse. A particular component, in a particular crash situation, will have a waveform determined by modeling or by actual crash tests. Each metering pin is machined to produce the desired pulse shape for a given specimen and set of crash conditions. In addition, aspects of the waveform can be varied through changes in the Set cylinder volume and the gas pressures in each cylinder prior to firing. A 2-½° metering pin, with capability of producing a nominal 40 ms half-sine pulse, is provided as standard. HYGE, INC. offers a metering pin design program, which enables the engineer to enter the characteristics of the desired waveform and automatically generate the required metering pin profile.

A sturdy support located at the end of the guide rails serves as a fixture mount. The mount is guided by bushings on two guide rails which are spaced approximately 12 inches on center. HYGETM can provide a seat fixture as an option. A special hydraulic brake rapidly decelerates the thrust column and acts as a shock absorber.

The primary energy source is 2200 psi compressed nitrogen. The customer provided standard bottle will provide approximately 25 firings at 15 miles per hour with an 80 pound body block. 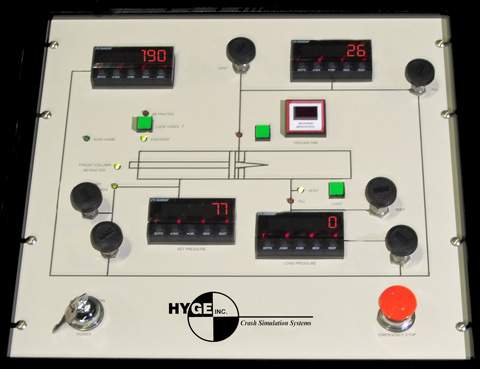 The Dynatest 500 control system provides a graphic interface for the firing sequence. A graphical interface allows the operator to visually determine the status of the system at a glance.

The control system allows the operator to input and monitor the following parameters:

The operator is led through the process in the proper sequence and prevents loading of incorrect, unsafe, or out of sequence parameters. Interlocks are hard wired to minimize errors.

The actual firing control can is performed manually from the panel. The operator loads the trigger pressure, disengages the lock yokes and begins the countdown sequencing to firing.

The Dynatest 500 is capable of producing a wide variety of shock pulses.

A standard half sine wave metering pin is supplied with the system.

The pulse may be modified by adjusting the HYGETM systems firing parameters.

For example, lower pressures will have a direct bearing on the velocity at the end of the stroke.